Here are the kids showing off the posters they made for their Daddy.We waited with a few hundred people at a large armory near Downtown Indianapolis. 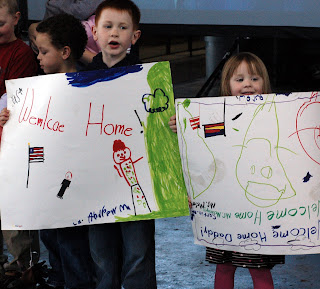 This is just MOMENTS before the soliders came in. It was so cool because we could see heads looking in the window every now and then. All of a sudden there was a LOUD kick on the garage door. 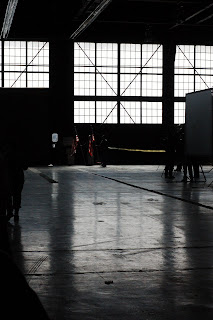 They marched in FAST. I barely got a few shots off with my camera before they were released. 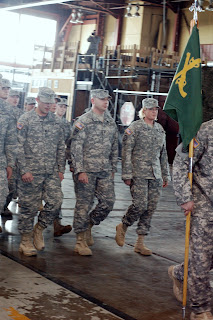 I was at the far end of the armory. The front line of soldiers were directly in front of me. I leaned way over to see around the crowd and caught a glimpse of Bill as he dismissed his unit. 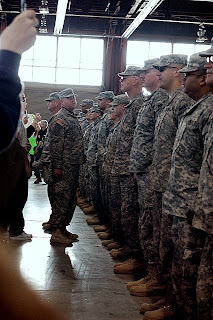 Here are a few more from when the kids got to give him a big hug. Of course these are horribly blurry but, we were all so excited to see him. 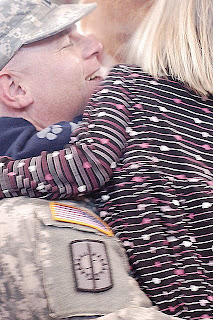 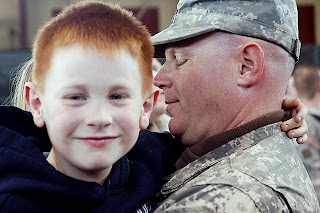 And I handed over my camera for a picture of all of us. 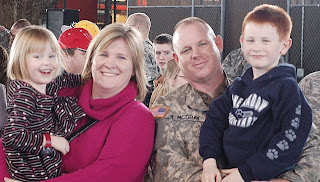 Bill wasn't even home 24 hours before Andrew took him to school to meet his classmates.
His class all wrote him letters and pictures while they were in Iraq. 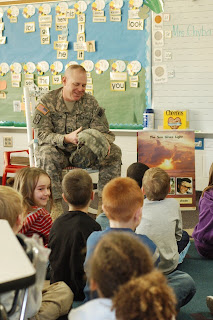 Bill took his helmet in for the kids to try on. He also gave the class an American Flag that had been flown in Iraq. It was the quietest I have ever seen the 25 Kindergardeners!

It's great to have him home!
-kimber
Posted by Kimber McGray at 9:14 PM

Good blog entry, Kimber. *sniff*
Welcome home, Bill...and thanks ever so much!

Sniff, sniff here, too! Welcome home and thank you, Bill! (Meanwhile, that pic of Laura holding that sign upside down is hysterical! :))

So very, very glad Bill is home safely sweetie! Awesome pictures but that first one of him hugging the kids really got me.

It brings tears to my eyes - I'm so happy they're all home safely. I hope they know how much we all love them...and we can never thank them enough for all that they've done.

Oh, and I LOVE that Laura is holding her sign upside down - LOL.

Oh Kimber, I'm so happy for you that your hubby is home. How exciting that must have been to see them march through those doors!

SO happy for you and your family! The photos are great!Love the one of Laura holding her sign upside down too cute.

So happy for all of you! That photo of Bill hugging the kids is just priceless!! Thanks for keeping us all posted and thanks to Bill for being such a HERO!!

The pictures say it all!!!

oh geez, i needed a tissue warning for this one! so happy for you, girly!

what great pix!! you all look so happy and relieved!

I'm so happy for your family! What a wonderful homecoming.

Oh my goodness! I don't know your family (I just read your blog all the time!), but those pictures just made me cry. Thank you so much for all you both do for our country. I am so happy that he is home safe and you get some sweet family time.

Wow, I am trying so hard not to cry... I won't cry... I won't... it's too late.... Thank you Bill for serving our country and thank you Kimber and kiddos for supporting him!

who cares if the photos are blurry - they are perfect! Welcome Home Bill :)

Enjoy your time together!!

OK - sniff sniff here too and tears a' rolling!! So happy for your family. Welcome home!!

this is making me all teary eyed. what a good thing to have happen. thanks for the awesome pictures, they don't look blurry, they look happy.

great to see you all together again!

Congrats! So happy for your family to be back together!

{Kimber} sooooooo glad Bill is home!!! Thanks to all of your for your service! Your pictures are sweet and beautiful!

Great to read that Bill made it home. Hope you are enjoying your time together. Had to grab a kleenex for this post. Enjoy!!!

Very Special. Is he a Marine. My son is just starting is MOS in Texas this week. I'm so proud of him and all the service men. Tell your soldier thanks for me.

Very, very happy he is home and safe. I hope he is home for good and he and his whole troop never have to go back again, ever.

My Books For Sale

Click here to order a copy of my books directly from me.

Remember This! My 2nd Book!